History
The Honor Guard was formed in 1995. Firefighters Randy Zimmerman and Larry Davey made a recommendation to form a team and it was immediately approved by Fire Chief Dean Hutt. In 1995, Firefighter Larry Davey assumed command of the team. Since its inception several firefighters have served on the Honor Guard. The team has expanded to a 23-member roster, including firefighters from each rank of the fire service. The Honor Guard utilizes an Incident Command System structured for funerals and memorials and is working on a specific field operations manual and guidebook for large and small scale events. The group has become well-known as one of the largest and most organized Honor Guard teams in the State of Iowa. 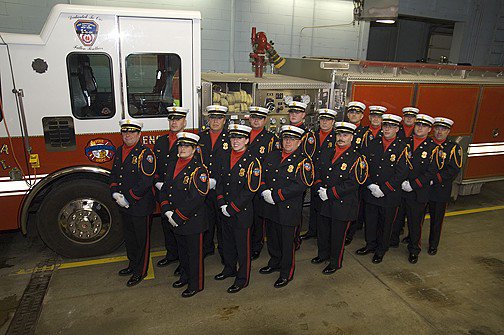 Requirements
Honor Guard openings are posted when several vacancies are created. New members are brought on by a series of interviews and performance requirements. Members must meet minimum participation requirements of scheduled training and events. The team conducts 12 training meetings a year. Members must also be well groomed and maintain a professional attitude and appearance at all times in and out of uniform. Members volunteer to participate both on and off duty, and the majority of them are volunteers.

Activity
The Honor Guard participates in several types of events. The team performs colors details at civic occasions, such as public parades, sporting events and other special community events as requested. They also perform colors details at many Fire Department events such as dedications, graduations, and awards ceremonies. The Honor Guard also plans, organizes, and performs at funerals and memorial services for department members. The team also assists other agencies with funerals and memorial services. Members of the Honor Guard have participated in many city and state events, such as the Iowa Firefighter's Memorial in Coralville, and will be participating in the National Fallen Firefighters Memorial.

Equipment
The Honor Guard uses various types of equipment in the performance of its duties. Chromed axes, pike poles are used as ceremonial guard weapons. A bell is also used when the ceremony of striking the 4 fives is conducted at a funeral of a fallen comrade. The equipment is made available to neighboring agencies for all events and ceremonies.
Government Websites by CivicPlus®
[]